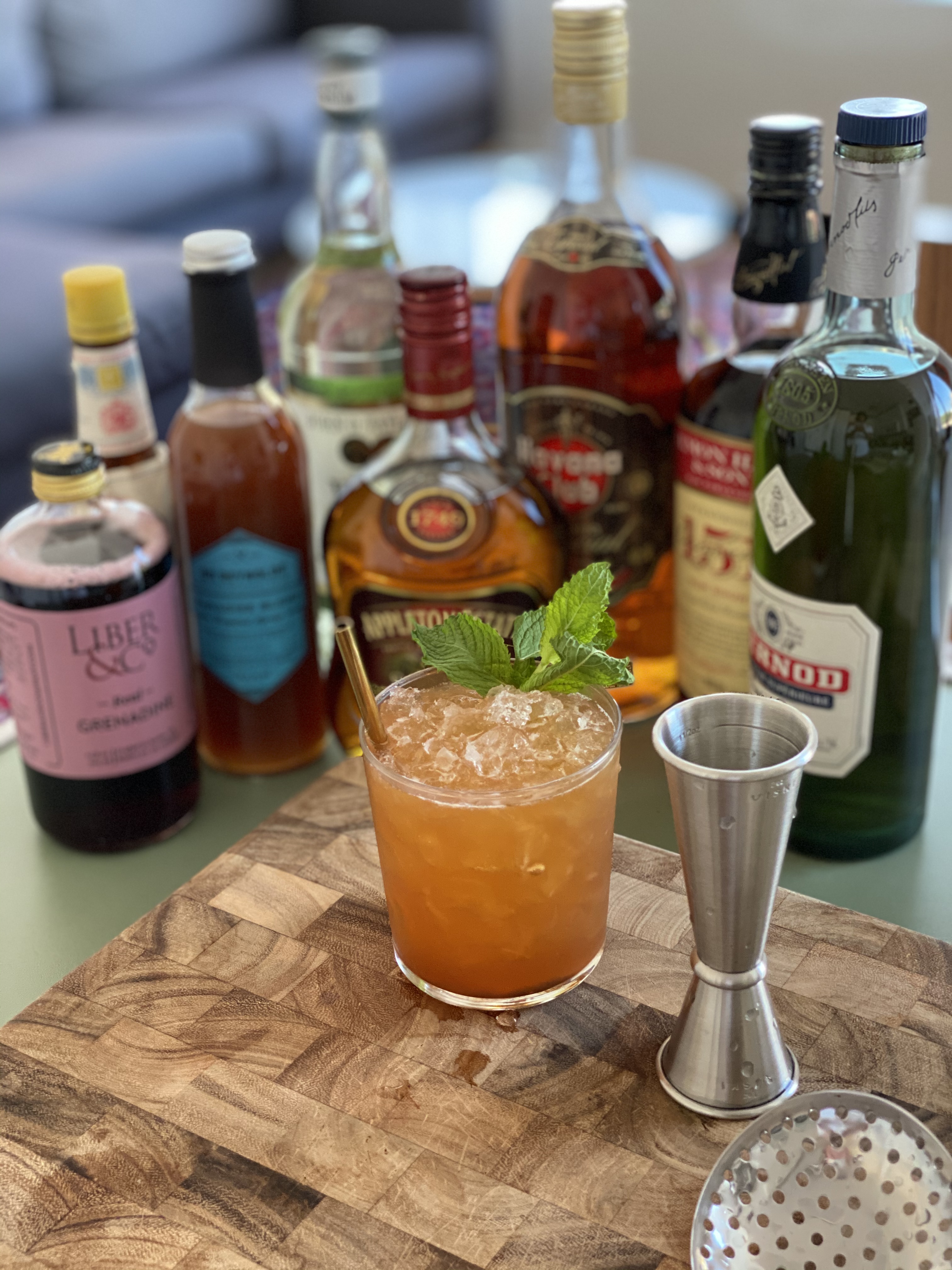 Shake all of the ingredients with ice. If making a single drink, pour (without straining) into a large glass that can hold about two regular sized drinks and top with ice as needed.

Otherwise, this recipe may be used for two lighter drinks; pour (without straining) into two larger-sized lowball glasses or double old fashioned glasses (this half-size drink is pictured above). Top with ice, as needed.

Garnish with a sprig of mint.

This drink would have originally been blended, however I shake blended tiki drinks instead.

The Zombie is arguably the most famous tiki cocktail besides the Mai Tai. It was created circa 1934 by Donn Beach and the original recipe was elusive for many years, due to a confusing web of proprietary, numerically labeled ingredients.

This recipe would not be possible without Beachbum Berry’s tireless search to untangle the original ingredients.

Tiki drinks are notorious for including a large array of esoteric syrups and rums. There may not seem to be any rhyme or reason to their structure and they are often mistakenly assumed to just be syrupy, alcoholic concoctions designed to mask the taste of spirits.

While the goal of tiki is certainly to make sweet and spicy drinks rather than bitter and dry drinks, the idea was never to cover up the flavor of the rums or to make drinks that were undrinkably cloying and saccharine.

The Zombie makes a lot more sense when you realize that Donn Beach was constructing a cocktail based on classic punches (see also: Planter’s Punch). Tiki is all about taking a simple drink structure and subdividing ingredients to add flavor complexity.

There is an old rhyme regarding punches that comes from Barbados:

One of sour, two of sweet,

three of strong, and four of weak.

A dash of bitters and a sprinkle of spice,

In this case, the “sour” is the lime juice and Don’s mix plays double duty adding a bit of grapefruit flavor to the lime. The “sweet” is Don’s mix, the falernum, and the grenadine. The “strong” is the split base of rums. The “weak” is the water from shaking with ice.

The bitters are the Angostura bitters as well as the absinthe, and the spice comes from the “sweet” components all doing double duty with Don’s mix adding cinnamon, Falernum adding clove, ginger, and allspice, among others, and grenadine adding pomegranate and floral waters. The Jamaican and Demerara rums also add to this spice component.

When you go through the recipe with this in mind, you can see how every component is playing multiple roles and fulfilling part of an ingredient split. Lime juice gets split with grapefruit thanks to Don’s mix, which also provides “sweet” and cinnamon spice. Falernum is adding “sweet” and spice. Demerara rum adds “strong” and spice. Etc, etc.

If you do the math on proportions, you’ll see that Donn actually created something stronger and less syrupy than the punch described in the above verse. Further, the sour to sweet ratio is more in line with the 4∶3 ratio specified in a Planter’s Punch recipe from the New York Times in 1908, rather than the 1∶2 ratio as specified above. However, the drink’s punch roots are clear and hopefully this helps shed light both on the ingredients list and the idea of tiki drink construction in general.